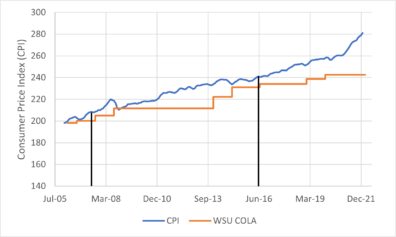 Hi!  My constituents are continually concerned about the differences in inflation vs. WSU cost of living adjustment (COLA) increases.  I know we are subject to what the legislature allocates, but WSU administration also obviously has a large amount (50% ?) of control over this.  To show historical differences, I used COLA increases from my own salary history and compared that with the consumer price index (CPI) from the US bureau of labor statistics data (https://www.bls.gov/cpi/).  For reference, I have been with WSU for 16 years, have been promoted on time, and my annual review averages about 4.1.  The two graphs listed show the continued departure of WSU COLA increases with the CPI. 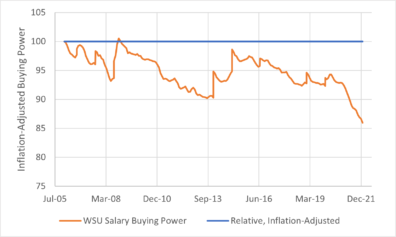 We recognize this is a persistent concern and have discussed salary issues with university leadership on multiple occasions. They are aware and understand the importance of the issue. The most optimistic news at this point is the WSU Insider Article: WSU Preparing 2023–2025 State Budget Requests. ~09.21.22

The state unions have negotiated their salary package for the next two years, with employees receiving 4% and 3% increases in the next two years. This is of interest to us because salaries of university employees often are folded in – we tend to get the same salary increases as the unions. ~10.5.22